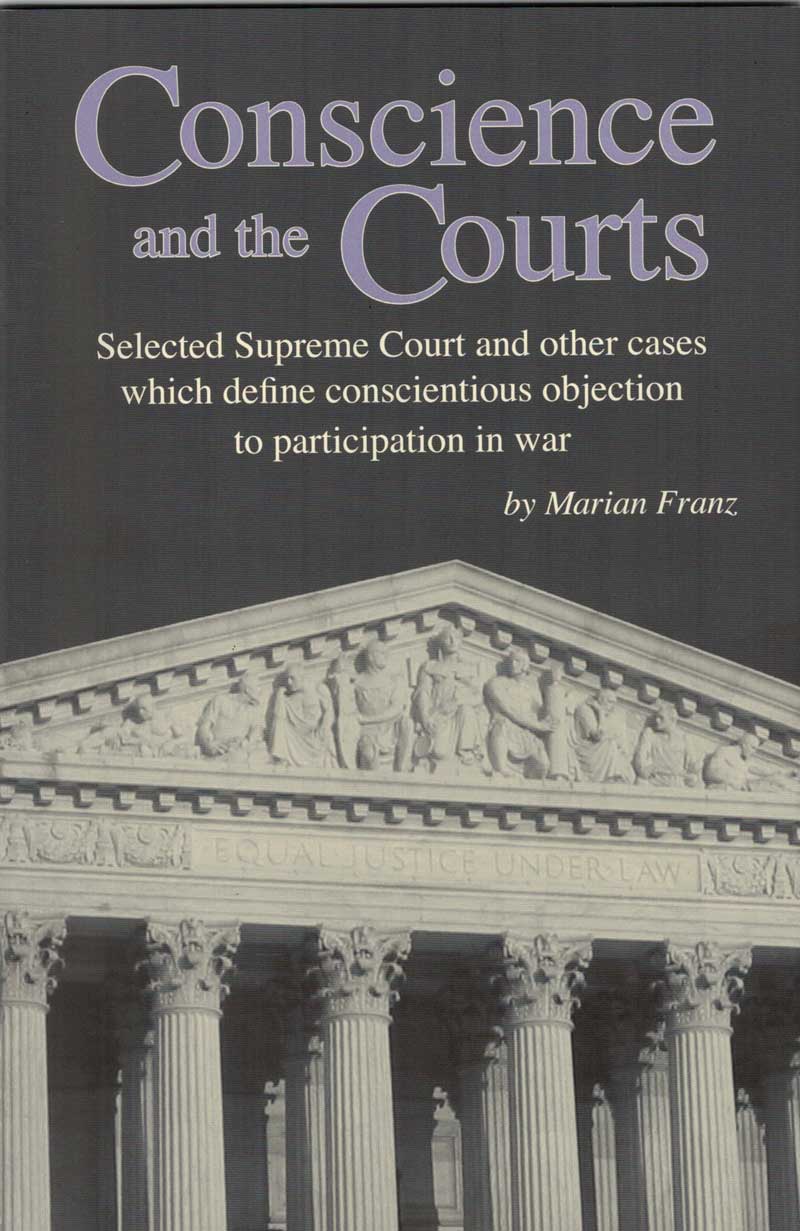 With your donation of $12 or more, you will receive a hard copy of “Conscience and the Courts”. The booklet’s introduction is included below.

Continue to our secure donation form

“Congress shall make no law establishing religion, or prohibiting the free exercise thereof…”

The legislative branch of government, Congress, makes the laws; the executive branch enforces and administers theme; while the Courts interpret them and judge their constitutionality. This booklet describes the struggle of the citizens who are conscientious objectors to participation in war and who strive to both obey the demands of conscience and the duties of citizenship. The entire First Amendment reads.

Congress shall make no law respecting an establishment of religion, or prohibiting the free exercise thereof; or abridging the freedom of speech, or of the press; or the right of the people peaceably to assemble, and to petition the Government for a redress of grievances.

The two clauses on which freedom of religion and conscience are argued in the courts are the first two: the Free Exercise clause and the Establishment clause. (Congress shall make no law respecting an establishment of religion, or prohibit in its exercise thereof; …) Government cannot establish religion or prohibit its exercise. It can neither aid nor hinder religion. The founding fathers considered freedom of religion a paramount issue. To carefully spell out liberty of conscience and religion was deemed a primary necessity because states with established religions had a history of restriction and persecution of their nonconformists.

The Second Amendment originally read: “A well regulated Militia, being necessary to the security of a free State, the right of the people to keep and bear Arms, shall not be infringed.” Madison added, “but no person religiously scrupulous of bearing arms shall be compelled to render military service in person.” The added words too were deleted.

Congress has recognized the unique status of those whose religious teachings disallow their participation in certain programs. The Congressional Research Service of the Library of Congress has said:

Historically and legally, objection to war has held a unique place in our nation. Most of the American colonial governments made special provision for conscientious objectors beginning with Rhode Island in 1662. The first Continental Congress resolved in 1775 that it would recognize the rights of those who would not bear arms because of religious scruples [2 Journals of the Continental Congress 189 (1905)]. By the time of the Civil War numerous states exempted Cos from conscription on religious grounds from their militias. … The Federal Conscription Act of 1863 contained commutation and substitution provisions, and the Draft Act of 1864 extended exemptions to conscientious objectors who were members of certain religious denominations. In the latter year, the Confederacy also exempted certain pacifist sects from military duty.

A World War I draft law exempted from combat service, but not from all military service, those conscripts who came from traditional peace churches. Yet in World War I hundreds of conscientious objectors were imprisoned for their beliefs. Seventeen were sentenced to death, 142 were sentenced to life terms, and served sentences averaging 16.5 years. None of the death sentences were carried out, but 16 conscientious objectors died in prison as a result of mistreatment. Military authorities eventually made some limited and local adjustments to alternative service, but no formal alternative-service program ever developed during World War I.

Anticipating World War II, representatives of the three historic Peace Churches (Quakers, Mennonites, Church of the Brethren) visited President Franklin Roosevelt to state that their young men would not submit to a military draft and, as in World War I, would go to prison instead. Within a year, Congress passed a law to provide conscientious objection to military service resulting from a draft.

By the time the U.S. entered World War II, “alternative service” in lieu of military service was created. Thousands of conscientious objectors provided essential staff for mental hospitals, volunteered as human test subjects for arduous medical experiments, and provided other service for the national health, safety and interest. The alternative service concept recognized that a country needs many kinds of service and that participation in the military is not the only way to contribute to the common good.

This booklet contains samples of various cases that have been judged by the Supreme Court of the United States. Conscientious objection to participation in war is permitted in law and has developed over years of time.